This week, I’ve been rejuvenated as a writer. I’ve decided to revise Ms. Dee Ann, making it into a cozy mystery (see previous post if you’re not sure what this term means), and I’m having a really fun time doing so.

Reading up on “cozies,” I saw that my novel already had many of the elements of this genre. For example, cozy mysteries are gentle books, with little if any violence, profanity, or sex.  That’s my style. Ms. Dee Ann has no bloodshed, the worst swearing is “hell’s bells,” and Heather, the baby, must have arrived via the stork.

Of course, there has to be some violence if a murder occurs, which I’ve decided will, but this crime takes place offstage. No torture, no gore, just a somewhat humorous reporting of the crime by Dee Ann’s landlady.  As should happen in a cozy, the victim is an unlikeable character who has treated others badly and maybe deserves to die. 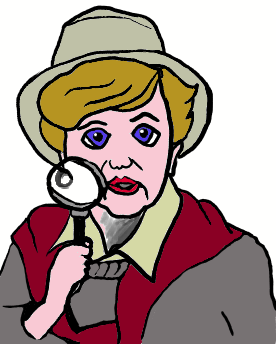 The protagonist in a cozy mystery is often a bright, resourceful woman (think television’s Jessica Fletcher here) who is keenly interested in the crime and maybe works to solve it. Bingo! I have Dee Ann, who will keep up with all the latest developments in the investigation of this shocking murder that has occurred in her new hometown, Narrow Creek, and will be on the scene when the crime is finally solved.

Speaking of Narrow Creek, I’ve learned a cozy mystery often takes place in a small town, making it easier for all the characters, suspects and sleuths alike, to interact. As more than one character remarks in my novel, in Narrow Creek everybody knows everybody’s business.  People love to gossip and in doing so, clues could possibly be revealed.

Or what seem to be clues. More in my next post on the importance of red herrings in cozies and how I plan to plant them in my novel.  Which, incidentally, has now been renamed Murder in Narrow Creek.