Cuba: Part Two, the Expected and the Unexpected

Cigars, classic cars, and mojitos? I went to Cuba expecting to find these, and I wasn’t disappointed.

In fact, I was quite impressed at the production I saw in an un-air-conditioned cigar factory where workers sat rolling cigars by hand. They worked with leaves of dried tobacco quickly but methodically, aiming to meet a daily quota.

We people-to-people visitors weren’t allowed to take photos inside the factory, so I had to settle instead for a picture of the finished products for sale in a nearby cigar shop.

I’m not a smoker and Cuban cigars aren’t cheap (unlike a lot of things such as restaurant meals and souvenirs), so I didn’t purchase any cigars to take home. I was given a couple, however, by the young man who taxied my husband and me to dinner in a 1954 Dodge convertible the last night we were in Havana.

Classic 1940s and 50s cars are everywhere in Cuba, but especially in the larger cities such as Havana. Here’s a fleet of brightly painted convertibles, waiting, I suspect, for tourists interested in tooling around in retro-style.

Cuba produces a lot of rum–and a lot of rum drinks. At almost every lunch and dinner sponsored by our tour group, we were greeted with a virgin mojito. A waiter came around with rum for those who wanted the alcohol added. Make mine a double!

Along with cigars, classic cars, and rum drinks, I saw famous sites such as Hemingway’s Cuban home, Finca Vigia (Lookout House) outside of Havana. The official line is that Hemingway donated the house and its contents to Cuba when he was urged by the American government to return to the United States after the revolution.

According to Mary Welsh, Hemingway’s wife at the time, the Cuban socialist government confiscated the property. Looking at the fully furnished rooms filled with personal items, I tend to believe Hemingway left quickly, perhaps believing he would be able to return to Finca Vigia. He never did, committing suicide in Idaho in 1961.

Another famous landmark I visited in Cuba doesn’t look like anything special, just an expanse of sandy beach on the south coast. It was here, however, at the Playa Giron that the Bay of Pigs invasion took place. Nearby is a museum, which, as you can imagine, gives a definite pro-Castro slant to the events surrounding the CIA-backed, failed military invasion to oust the new communist government. 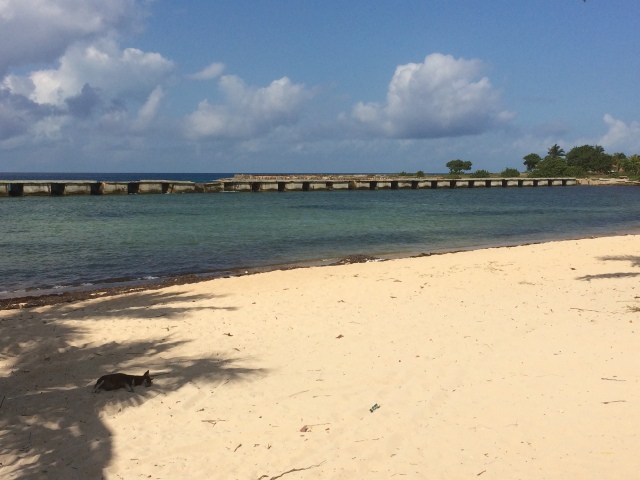 Speaking of Castro, I expected to see his picture in government buildings and perhaps on billboards. In fact, he was all over the place along with his buddy Che Guevara. It was a little unexpected, though, to find his picture nestled with the pottery at the King Ranch, a 35,000-acre cattle spread seized by the government in 1959 in the Camaguey Province.

At the ranch, our American group was invited to see a few rodeo acts, where I encountered another surprise: the display of the American flag alongside the Cuban flag before the show began.

Since 1959 Cuba has been a socialist country which, under Castro, declared itself an atheist state. But all which hearkens back to a Catholic past has not been lost. I was surprised to find a church as magnificent as the Cathedral of San Cristobal with its baroque façade in Havana’s Cathedral Square.

An interesting fact I learned: the cathedral held the remains of Christopher Columbus from 1796 until 1898, when they were taken to Seville Cathedral in Spain. 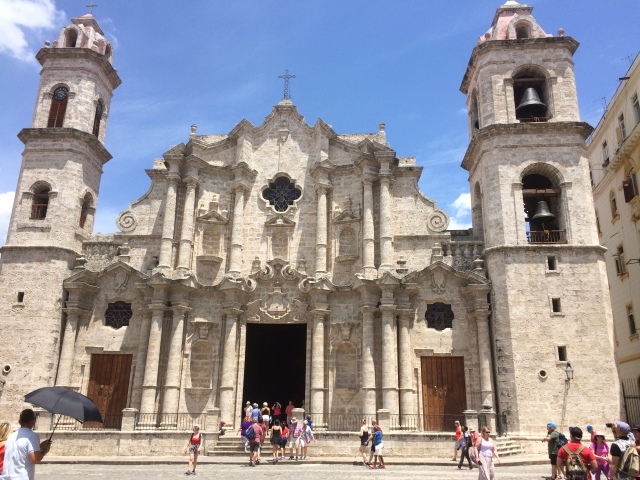 Cuba, a country of contradictions, where I saw the expected and the unexpected.

1 Response to Cuba: Part Two, the Expected and the Unexpected