“This Is A Very Promising Work”

Posted on September 18, 2017 by patsypridgen

Me with the hubby in Portugal

Long time, no post. I know…I’ve been in Europe, Spain and Portugal to be exact.  A two-week trip that really takes about a month out of my writing time, since I’m not in my “write” mind the week before I leave or the week after I get home.  Planning and packing take the place of blogging prior to leaving, and jet lag and trip fatigue prevent any rational thought for a while after I get back.  But I’m home now and all rested up.

In plowing through two weeks’ worth of mail, I found my third response from the North Carolina Writers’ Network Critiquing Service. A few weeks ago, I posted about the first two responses I received but failed to mention I was still waiting for the third and final response.

I put the manila envelope to one side as I threw away junk mail and piled up a stack of bills. I wasn’t sure I was ready for another lecture about how much revision I need to do to Ms. Dee Ann Meets Murder.

Finally, I decided to slit the envelope. Maybe I’m just getting tougher, but this critique didn’t seem so harsh.   In fact, the first thing I noticed was the red-letter, hand-scribbled “Nice work!” on the cover letter.

My critiquer’s overview read: “This is a lively Southern novel set in the 1970s. Its protagonist is a relatable young wife and mother who stumbles into a small-town ‘whodunit’ at the same time she struggles to adjust to changing roles and expectations for women.”

Yes, yes, yes. I couldn’t have explained my novel any better myself.

Oh, there are still suggestions in a section labeled Weaknesses. “The action of the story takes too long to begin.  We see too much of the protagonist’s internal thinking and musing, rather than observing how she behaves, reacts, responds.”

But this critiquer goes on to give concrete suggestions for how to fix what she sees as weaknesses. For example, she tells me to condense the beginning of Chapter 3, where I have Dee Ann unpacking in her new rental home, and start instead with the landlady’s visit. 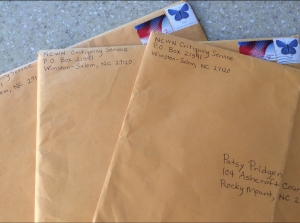 Okay, I’ll think about that suggestion–and the others I’ve been given by all three critiquers.  I’ve received criticism, but I’ve also been given encouragement.  In fact, there’s one line from Critiquer #3 that I have memorized and plan to repeat like a mantra:

“This is a very promising work.”

2 Responses to “This Is A Very Promising Work”