Who Knew the Rocky Mount Christmas Parade Could Be So Much Fun?

Posted on December 2, 2019 by patsypridgen

What’s there to do on the first Sunday in December after you’ve had your Thanksgiving turkey leftovers for lunch and taken a nap?

Go to a Christmas parade! I hadn’t been to the one in my hometown in years and realized yesterday what I’ve been missing. The Rocky Mount Christmas Parade was a dose of  wholesome fun and a great way to usher in the holiday season!

So what made me decide to go this year when I haven’t been in the last fifteen (maybe longer)? I went to see my grandson, the cute little Boy Scout with the yellow tie in the picture below waving at the crowd. His troop was on the Barnhill Farms antique fire truck.

But here’s the thing. After he rode by fairly early in the parade, I could have left and gone on about my Sunday afternoon business. But I was enjoying the spectacle of bands, floats, and local dignitaries cruising by. I stayed put. Here’s some of what I saw (and heard).

Somebody spent some time decorating this float.

Check out the tree and the poinsettias on the Edgecombe Community College float.

Hey, the Macy’s Thanksgiving Day Parade isn’t the only one with blow-ups! 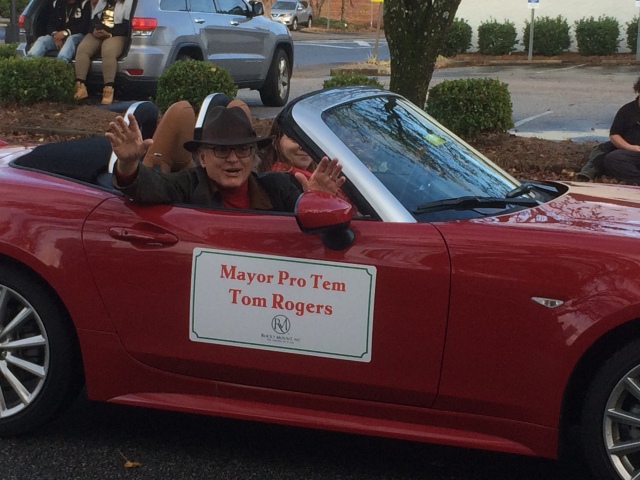 Want to see a smiling councilman? Go to the Rocky Mount Christmas parade!

These little fellows stood beside me on the sidewalk in front of First United Methodist Church. I enjoyed watching them watch the parade.

Loving the candy thrown from the floats.

I took so many pictures my phone died before the grand finale arrival of Santa. Fortunately, my twelve-year-old grandson was standing by. I had him text me his photo of the last float of the Rocky Mount Christmas parade.

Is this the real Santa? Photo credit to Sammy Bowles

Will I go to the Rocky Mount Christmas Parade next year even if I don’t have a cute little grandson to lure me there? I’m thinking yes. It’s an opportunity for a feel-good day about my hometown. I love being proud of my city.