It’s the King James Version for Me

Posted on October 1, 2020 by patsypridgen

As an adult, I go to church with either the Methodists or the Presbyterians, but a picture my sister sent me this week reminded me of my strong Baptist roots. Was anybody else once a member of Girls’ Auxiliary, or GA’s as we called it back in the 1960’s?

I’m the tall blonde on the far right, holding my scepter with my white shoes peeking out underneath my long white dress. My younger (and therefore lower in GA rank) sister is seated below me. She’s the cute brunette with the long bangs.

The above picture captured our annual coronation at West Edgecombe Baptist Church, where we GA girls were recognized for having completed a rank in the organization’s hierarchy. I can’t recall all the titles, but being a Queen Regent in Service was the ultimate goal (one I reached in case you’re wondering), requiring several years of GA membership and completion of courses of study.

Those courses of study were not for the lazy. They required writing essays (“Why I Do Not Smoke”), learning which foreign countries had Baptist missionaries (a lot), and memorizing scripture (in the King James version).

Yes, boys and girls, once upon a time, young people, Baptists anyway, learned passages of the Bible by heart. And in the 1960s country church I attended, we memorized from the King James version, no less. This is the title page from my childhood Bible, given to me in 1962 by my parents. I used it until a few years ago when its spine completely disintegrated. 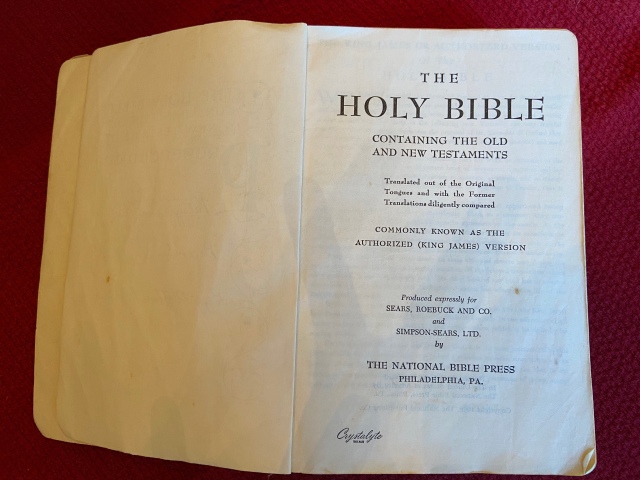 I then switched to using the Bible I received upon graduating from high school in 1972, another King James version. I wonder when this practice of giving Bibles to high school graduates ended.

Oh, I know, in today’s world, doing so would be culturally insensitive if not against the law, but at West Edgecombe High School in 1972, we were all Protestants, mostly Baptists, with maybe the rare Catholic mixed in. I’m not sure everyone appreciated a Bible, but they didn’t make a fuss about getting one, even if they took it home and never opened it.

Back to my GA days, memorizing the King James version of scripture helped me in more than one way. I wasn’t lost when I read Shakespeare in both high school and college. The King James Bible was completed in 1611. Shakespeare’s First Folio was published in 1623. I wasn’t a stranger to thee and thou, art and doth.

But even more important, I learned Bible verses in what is, to me,  a beautiful, musical  version of the English language. Verses I can recall when life is hard or I’m feeling unkind or I need direction. Here’s one of my favorites:

“For God hath not given us the spirit of fear; but of power, and of love, and of a sound mind.” (II Timothy, Chapter 1, Verse 7)

You don’t even have to be fluent in King James English or be Baptist, Methodist, or whatever to understand these words.

1 Response to It’s the King James Version for Me